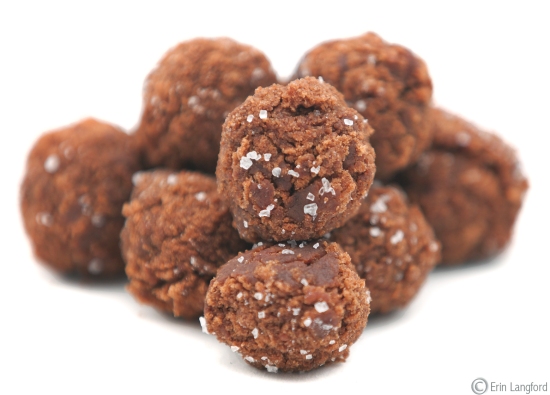 So I had a go at turning the lyrics from South Park Chef’s Chocolate Salty Balls song into a recipe and it kinda worked…not what I expected but not that bad either. It was essentially a very wet recipe, like a cake mix as I tried to keep to the original recipe as much as possible to see a) to see if it would actually work and b) to get the true essence of flavour of his Salty Balls. The only change I made was doubling the flour content because it was so runny. That said I am really looking for to tackling the recipe again in the next few weeks and really putting my crass edge on it and making it a three Munch treat.

Place a small saucepan on the stove and bring the water to a simmer, place a metal mixing bowl on top, don’t let the bowl touch the water and add your chocolate and melt.

Grab the cinnamon, three egg whites, melted butter and flour and mix it all in a bowl til well combined…baby.

Now add the chocolate, brandy, sugar and vaniiiiiila. Fold through.

Prep a large baking tray (I used a pizza tray) and pour out the mix, spread evenly. And give that spoon a lick ;)

Cook the mix until the top feels firm or you can skewer it and not have any residue on fork etc. I cooked mine for 15 minutes.

Carefully remove the baking paper from the tray and place on your bench to help the cool down process, only about a minute or so. It doesn’t actually take long to get to a manhandling stage.

Gently peel off the top crust and roll the cakey thing into balls. You’ll have to be quite firm.

Roll the balls in a little sea salt – don’t go nutso on this or it will no doubt taste disgusting. Serve as soon as you’re ready for 2 reasons; the salt dissolves and you lose the effect and secondly as this is essentially sponge cake within 4 hours or more the little things will start to dry out and go crusty :(

A can't remember a time when food hasn't been a part of my love of life. In fact part my very first memory is of my Nanna's Carambola tree in Darwin age 2-3. Since then it was sharing an Avocado with Mum and squishing the leftovers of the skin onto our faces for a free mask in Cairns age 7. Climbing Mango trees with my best friend Rachael in Mareeba aged 11. Scoffing three plates of Spaghetti before school athletics carnivals ages 10-17. Sucking the life out of tin of Sweet Condensed Milk as a little girl. To tell you the truth I still do this ;) Savouring my first Ham and Mushroom Croissant in Paris near the Musee D'Orsay age 24. Chomping down on my first Diddy Reis on my first trip to the USA age 25. Discovering via accident that finely shaved Garlic atop soft Brie is the best cracker combination ever Age 26. Eating everything off the street in Vietnam and consuming Pho for two weeks straight age 29. Munching on Cheese and sipping Moet Chandon in the Yarra age 30. Appreciating my first Veuve Cliquot after a show in Los Angeles age 31. So what I am saying is so many big moments of my life are in someway connected to food. I may not remember the names of the all the people I met but I will more than likely remember the kinds of food I ate at the time and be able to describe them to you in more details than you want to hear. So here on Munch Munch Munch is my love of food in all it's glory. A shame I didn't start documenting earlier.